I made an exception last year and published my first review on a wine from outside the other 46 states. Since that inaugural post, I’ve managed to feature wines from not only New York, but Canada as well. Highlighting emerging wine regions, or better yet, wine regions often neglected by the mainstream media has and will always be my primary goal. That said I do enjoy wines from all over and enjoy a Napa Valley Cabernet Sauvignon from time to time. I thought what better time to include my first California post while sitting on a plane headed home from San Francisco. And honestly, what better way to burn 5 hours.

I recently opened and enjoyed two wines from Napa Valley legend, Robert Mondavi, a true pioneer and innovator in California winemaking. His winery remains an architectural masterpiece, and continues to be a popular tourist attraction for visitors. His earlier wines were built to last, and are usually my wines of choice when I celebrate special occasions. It’s always a treat to drink vintage wine, especially with friends and family, but its even more exciting to pour wines from years that have special meaning (both vintages marked birth years).

After much wrangling, I removed the cork on the 1975 Robert Mondavi Winery Cabernet Sauvignon Napa Valley, and decanted to remove any cork residue. Brownish in color, the wine displayed an earthy and musty nose. Surprising fruit on the palate with short-lived notes of eucalyptus and leather. Definitely past it’s prime, but still drinkable for a 36 year-old wine.

Up next was the 1979 Robert Mondavi Winery Cabernet Sauvignon Reserve. The reserve wines feature fruit selected from the finest vineyard blocks and often showcase the most complexity and elegance. This was definitely the case with the ’79. Dark red in color, the 32 year-old wine would have fooled many. The wine opened with bright red fruit on the nose. Plums, cassis, cedar, tobacco and leather notes on the palate. Surprisingly complex and “alive”. Well made and still has a few years left. 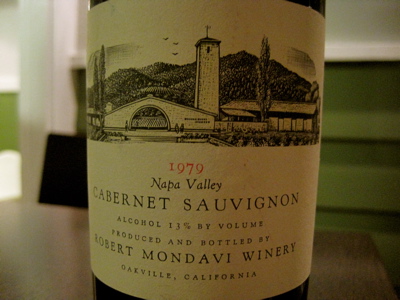 A fun evening was had by all, and more importantly, great memories.

Whatever you do, pour yourself into it. -Robert Mondavi

Tomorrow we return to our normally scheduled program, local wine from the other 46 states. Cheers!