Originated in Southern Québec, ice cider (or cidre de glace in French) is a dessert wine made from apples and concentrated by natural winter cold. There are two approaches to producing ice wine according to Wikipedia: cryoconcentration and cryoextraction. “Cryoconcentration involves harvesting the fruits late in season and leaving them in fresh storage until late December, when they are pressed and the fresh juice is left to freeze naturally. In January, the concentrated juice begins the process of cold fermentation. Cryoextraction is similar to the traditional method used to produce ice wine: apples are left on the trees, at the mercy of the weather, until the end of January. They are picked when the temperature hovers around -8°C to -15°C, and then pressed and left to cold ferment for months.”

Inspired after a trip to Montreal, Albert and Eleanor Leger decided to start Eden Orchards and Eden Ice Cider Company in the winter of 2007. Located on what was an abandoned dairy farm in West Charleston, Vermont, the business currently consists of 800 apple trees and a small pressing operation and bonded winery in the basement of the rebuilt farmhouse. They currently produce 3 ice ciders, in addition to an apple wine, all from 100% traditional and heirloom varieties of apples in Vermont. 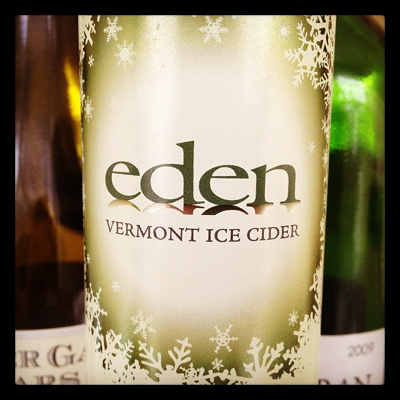 Seducing aromas of apples and apricot, one can’t help but conjure up thoughts of a fresh baked apple pie. Or to keep it local, a nice Vermont cheese and nuts would pair perfectly. On the palate, distinct apple flavors with a pinch of lemon and pear. Wonderful complexity, sweetness and acidity make the Calville Blend an instant classic destined for greatness.