Founded in 1989 by Whitie and Margaret Hubert, Tarara Winery is a 475 acre farm that stretches along the Potomac River in Leesburg, Virginia. A veteran on the Virginia wine scene, Tarara sources from several of the states best vineyards, including their estate vineyard Nevaeh. I haven’t visited since Jordan Harris joined the team as winemaker, but I’m a big fan of his winemaking, and have had the opportunity to sample several of his wines. 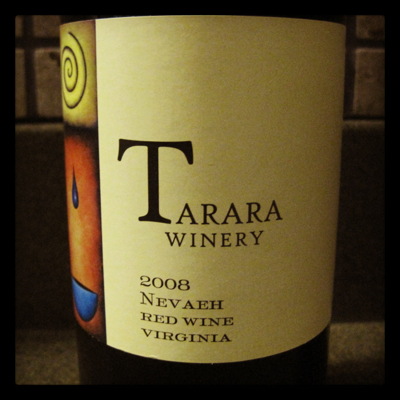 Tarara’s primary focus is on terroir, and hence produce a number of single-vineyard blends. The Tarara Winery 2008 Nevaeh Red is a blend of 71% Merlot, 23% Cabernet Sauvignon and 6% Cabernet Franc. The wine was aged exclusively in new Virginia oak for 18 months and fermented on indigenous yeast and retails for $40. From the website, “Nevaeh is made up of three distinct blocks – The Hill, The Road and The Pond. All of Nevaeh is planted to cane-pruned vertical shoot positioning with an average yield of just shy of 2 tons per acre. This helps with even ripening, better concentration and an easily sculpted vineyard.”

A somewhat tight nose (I recommend opening a few hours in advance), aromas of black fruit, namely ripe blackberries, black currant and a dash of black pepper. Earthy undertones with cedar box, tobacco, cassis and black cherries on the palate. Medium-bodied, solid tannins and good acidity, the wine impresses with each sip. A well made wine that will reward the patient drinker.