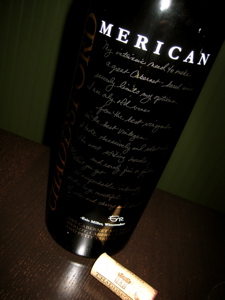 One of the iconic wineries on the East Coast, Chaddsford Winery has been producing award-winning wines since their first release in 1983. Heralded winemaker Eric Miller is largely credited with launching a wine industry in Pennsylvania that now boasts more than 100 wineries and counting. Having achieved national acclaim and recognition, Eric’s wines have been featured in a number of prestigious wine and food publications. A true wine pioneer that has dedicated his life to perfecting the art of winemaking.

One such wine that has raised the bar is their flagship Bordeaux blend, the Chaddsford Winery 2005 Merican ($40). A classic blend of Cabernet Sauvignon, Cabernet Franc, Merlot and Petit Verdot, the Merican makes a statement with a bottle that is almost twice as heavy as the norm. A serious bottle of wine that not only looks the part, but acts the part.

Spicy, rich, and intense, flavors of chocolate, currant and black cherries combine to seduce your every sense.

Impossible to find now but was great while it lasted. Bought a case , glad i did.