If I had the patience to cellar wines, this post would be focused on a vertical of the best Chardonnay in Virginia, rather than a single wine review. Unfortunately, I have little willpower when it comes to Jim Law’s wines, and especially his Hardscrabble Chardonnay. Instead, I feature his 2008, and urge you to read more about his 2007 and 2006 vintages previously featured on the site. And for my fellow Virginians, if you’re serious about wine, I hope you hold back a few Hardscrabble wines in a cool, dark place. Trust me, you’ll thank me in 5 years. 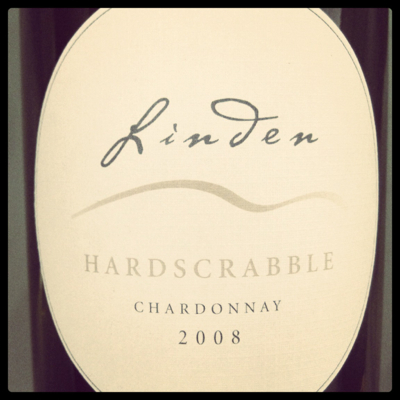 Barrel fermented in French oak, the Linden Vineyards 2008 Hardscrabble Chardonnay was more restrained on the nose than past vintages. Floral, apple, lemon zest and subtle oak on the nose.

Bright, clean and mineral-driven. Amazing structure, typical of Linden, and especially the Hardscrabble wines. A polished effort that is drinking well now and should do so over the next 5 to 10 years.