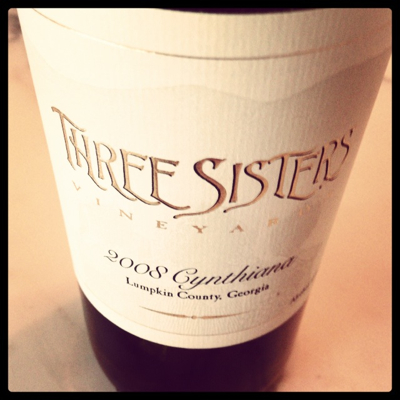 Cynthiana, also known as Norton, is the oldest native North American variety in commercial cultivation today. Popular in the mid-Atlantic and southern states, Cynthiana has found a home in Georgia, and especially at Three Sisters Vineyards. Established in 1996 and bonded in 2000, Three Sisters Vineyards is Lumpkin County’s first vineyard since prohibition and holds the distinction of being “Dahlonega’s First Family Farm Winery.” Located eight miles northeast of the site of the first major US gold rush, Dahlonega, the farm’s name was inspired by the property’s spectacular view of Lumpkin County’s Three Sisters Mountain.

The Three Sisters Vineyards 2008 Cynthiana is a lovely deep, rich color in glass, with a nose of blueberry and black fruit. On the palate, medium-bodied with plum, black cherry and a touch of oak. The wine screams for food (perhaps a hearty beef stew or grilled venison?). A part of me thinks this wine could go another two to three years, but drinking so well now, why wait any longer. Well done.