There are moments when I think I could only drink one regions wine and be perfectly happy. The Finger Lakes happens to be one of those such regions. I credit Lenn Thompson and the New York Cork Report for the introduction and making my bank account a bit smaller.

What started with an invite to a Twitter TasteLive event hosted by Lenn and the Finger Lakes Wine Country Tourism Marketing Association back in 2010, has transformed into a small obsession and me becoming a huge champion of the regions diverse wines. So much in fact I considered renaming my blog to afford me the flexibility to write about New York wines! One winery in particular, Ravines Wine Cellars, had me from hello. 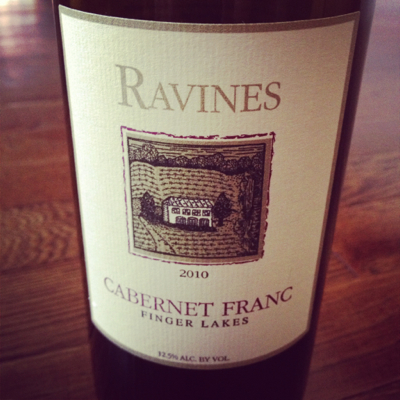 The story begins in 2000 when Morten and Lisa Hallgren purchased a 17 acre parcel of land on a glacier-carved hillside on the Eastern slopes of Keuka lake. This land is located at the widest part of the lake which allows grapevines to receive maximum benefit from its temperature-moderating effects. It has a good slope which keeps the mineral rich soils well-drained, and is situated between two deep ravines, which drain cold air from the land during the winter. These ravines are the namesake of the winery.

Refined whites or complex reds, it’s hard to go wrong with Ravines. The Ravines Wine Cellars 2010 Cabernet Franc, a perennial favorite, is a great example of one of the regions signature red grapes. Varietally correct, the fruit-forward wine impresses with black fruit, pepper and spice on the nose and palate. At $19 retail, it’s hard to find a better value. But don’t take my word for it, instead, go out and try for yourself. I promise, you won’t be disappointed. Cheers!